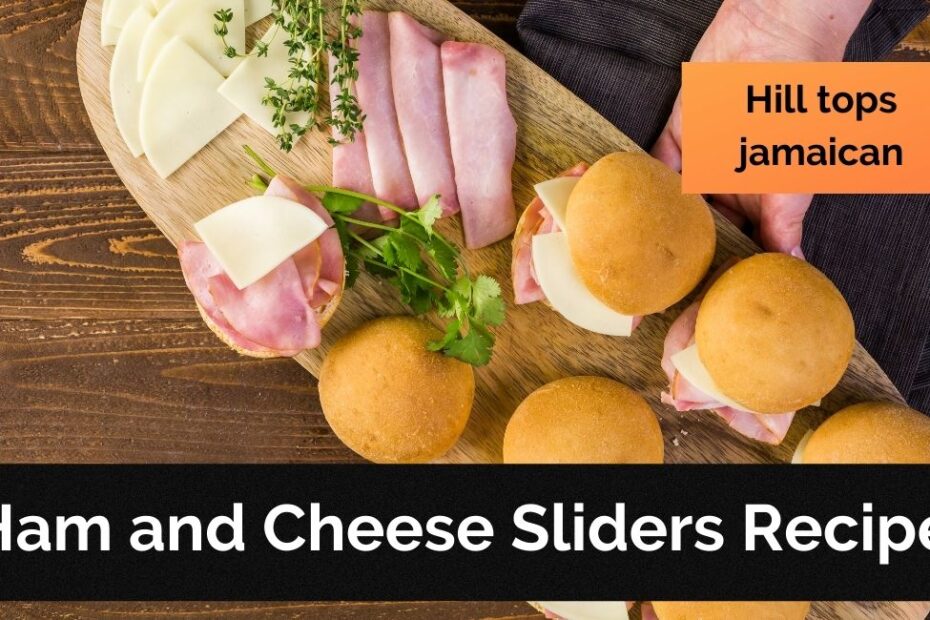 These Ham and Cheese Sliders start with Hawaiian sweet rolls, which are then stuffed with Swiss cheese and sliced ham, topped with a delectable poppy seed and mustard melted butter, and finally baked till they reach a delicious state of delicious perfection. Extremely straightforward, brisk, and guaranteed to win over everyone in the room.

A delicious sandwich is one of my favorite foods, but my spouse could easily consume one every single day. It goes without saying that he was overjoyed when I told him that I would be constructing little versions of them. However, this particular ham and cheese slider is such a timeless classic.

You can use any ham you choose, Hawaiian sweet buns stuffed with loads of ham, lots of Swiss cheese, and the tops are lastly sprayed with some melted butter mixed with mustard, Worcestershire sauce, and lots of poppy seed.

I adore utilizing Hawaiian sweet rolls since they have the ideal combination of a fluffy interior sweet center and the most fantastic outer crust, which is cooked until it reaches a golden crispness. As a result, I find using them to be quite enjoyable. If you can’t find any, don’t beat yourself up over it; in their place, you may use dinner rolls or create your own using the recipe I provided.

The Components That You Will Require

As a starting point for the butter sauce, I melted unsalted butter and used it.

When it comes to condiments, nothing beats Dijon mustard for pairing with ham. If you prefer yellow mustard to Dijon, you may certainly use it instead.

The taste of the sliders is brought up to the forefront with the addition of just a little of garlic powder.

In order to impart a nutty flavor to the butter combination, poppy seeds were used.

The vast majority of people are unaware that they are also beneficial to your health due to the high levels of magnesium, calcium, and fiber that they contain.

The addition of dried chives will impart a subtle flavor with a hint of onion as well as some beautiful color to the dish.

The addition of Worcestershire sauce to the butter mixture has the effect of significantly enhancing the flavor and imparting an umami quality.

Salt and pepper are two condiments that, in my opinion, should be added to the majority of sandwiches.

I used deli ham that was cut very thinly; however, this would also be an excellent use for any leftover ham.

The addition of Swiss cheese brings out the full potential of these sliders. You can use other cheeses instead if you prefer them.

How To Make Ham and Cheese Sliders

Make preparations for the oven and the baking dish.

To begin, set the temperature in your oven to 350 degrees. Spray a baking dish that is 9 by 13 inches with cooking spray. Make sure the baking dish you use is large enough to accommodate all of your buns.

Create the sauce using the butter.

After adding the melted butter, mustard, garlic powder, poppy seeds, chives, Worcestershire sauce, salt, and pepper to a small bowl, whisk all of the ingredients together until they are fully incorporated. Using this method will result in a butter combination that is rich in taste and can be used to brush over the sliders.

Make slices in the rolls.

DO NOT attempt to separate the rolls. Make a horizontal cut through the rolls using a knife that has a serrated edge. Put the bottom section into the baking dish that has been prepared, with the cut side facing up.

Put together the different sliders.

Spread one-half of the deli ham slices all over the buns in an equal layer. After that, arrange all of the cheese pieces on top of the ham, and then finish off the sandwich with the remaining ham slices. After assembling the sandwiches, place the top halves of the buns on top of them. Do you see how simple this is?

Coat with butter sauce and brush.

Spread the incredible butter mixture all over the tops of the rolls in an even manner, and if there is any sauce left over, simply pour it over the buns.

Make the cuts, and serve.

Cut each burger into individual sliders, and serve them as soon as possible.

How is it possible to prevent sliders from becoming soggy?